A Perspective on the Syrian Conflict

A Structural and Cultural Approach

At the last meeting of the representatives of Group of Friends of the Syrian People, I had the pleasure to present my views on the Syrian conflict.  I used that opportunity to suggest a new approach to deal with the Syrian wicked issues. My main focus was public and civil society organizations instead of the usual disproportionate focus given to international stakes.

This approach depends on attacking root causes at the paradigmatic and philosophical (or cultural) level through a well-planned intervention at the societal level using educational rather than political institutions.

I would like to thank the Group of Friends of the Syrian People for inviting me to speak at this meeting.

I would like to especially thank Ambassador Stefan van Werch for believing that I have something to say regarding the conflict in Syria.

As a Syrian and on behalf of all Syrians, I would like to thank the Group for their continuing support of the Syrian people in their darkest moment and most trying ordeal.

In the past four years, I was a part of many organizations in Syria, Turkey, and Germany.  We basically tried to replace the state: we did aid programs, political representation, and Local Councils. In this rich  experience my approach was managerial due to my background as an engineer and a project manager.

But I also learned that the Syrian problem needs, in addition to good management, strategic thinking and structural change to attack the root causes of the problem.

In the next fifteen minutes I would like to talk about how the the international community currently deals with the Syrian conflict , and what future scenarios we could expect. Then, I will propose a new perspective on the conflict and a set of practical steps to reshape its future outcome.

In my opinion, current approaches to the conflict have two main characteristics:

2) Scenarios for the future

If the current approaches to the conflict are maintained, my predictions for the Syrian conflict will be grim. Should the current internal and external dynamics continue, the last study by Max Fisher projected that the conflict can last another ten or fifteen years before reaching the ripe phase that can be followed by a natural resolution.

Meanwhile, the international community can expect to deal with the cost of:

As for Syrians they can expect

What I am suggesting as a new approach to the conflict will intentionally ignore international stakes, but will focus instead on perspective and solution:

The Syrian conflict is not simply a revolution of a well-organized opposition against a tyrannical regime, it is a case of state and societal failure. We are witnessing today the process of disintegration of an old order that could not work. It is a structural problem that needs structural solutions.

The current Syrian state, albeit modern in appearance and institutions, has deep and structural flaws. The presidency, for example, is not an executive position but an autocratic monarchy. The state under Assad the father was a welfare machine distributing handouts to certain clients in return for loyalty. Under Assad the son, it became the private property of a small clique, a company that employs some lucky citizens but leaves the rest of them to unemployment and poverty.

As for the political culture of society, it is one of extreme dependency on the state and lack of political and economic initiative, of idle civil society, and ignorance in civic rights and duties.

In what follows, the practical steps I am going to suggest do not concern the state and its central institutions but will focus on the political culture. The aforementioned structural perspective implies that change, and hence a solution to the current crisis, could not be brought about only by political decisions and high-level bureaucrats. It demands a cultural change.

We need to energize society, first, as a political entity through local politics and local government based on the principles of good governance; second, as a civil entity through effective civil society organizations; and third as an economic entity through liberalization, private initiative, and market economy. In other words, we need to educate rather than  transplant preconceived, ready-to-install structures. We need to educate about the philosophy of the modern state, both central and local, and about the ability and skills to adopt that knowledge to Syrian needs. 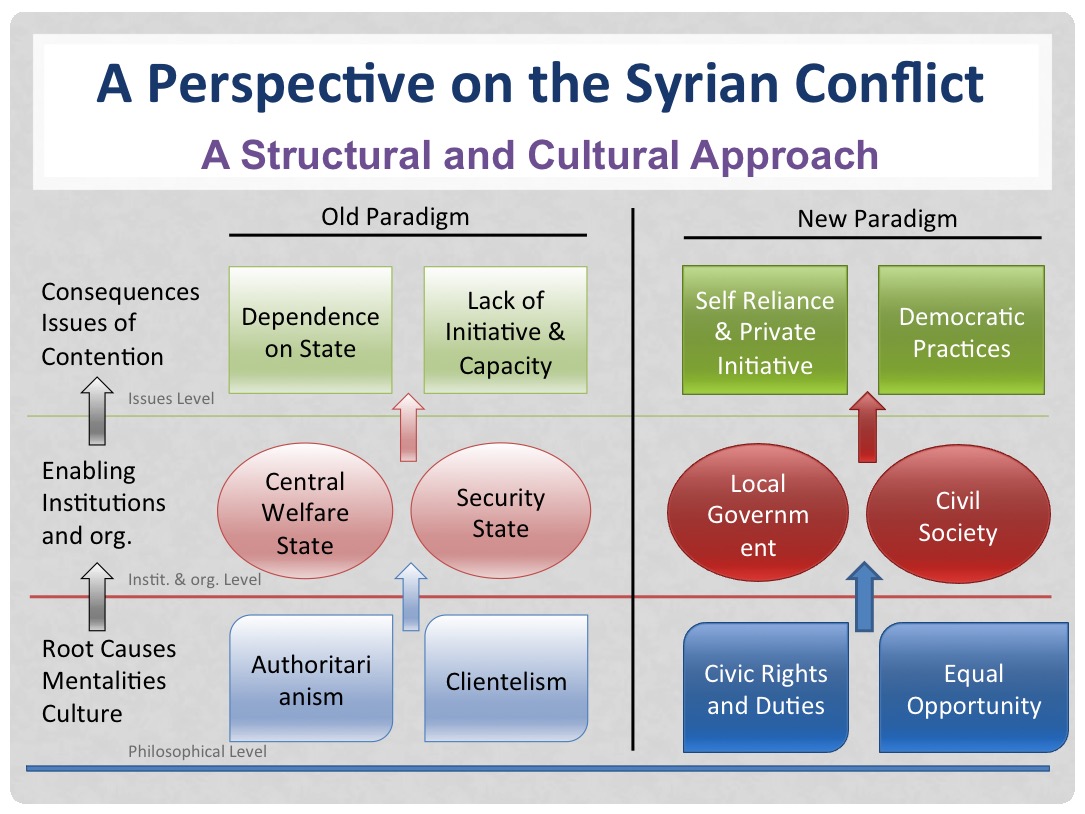 The slide indicates that the problems at the issues level are generated by the organizations and institutions in the second level. The second, institutional, level is considered here to be constituted of tools transforming mentalities into consequences. A real change can only be achieved by education and training, in order to affect the bottom, philosophical, level. This is realized by building enabling structures through a well-planned intervention on societal level.

As practical steps, and in order to effectuate the aforementioned cultural change, I suggest the establishment of various educational venues.

The Syrian Coalition, the Syrian Interim Government, and the Group of Friends of the Syrian People can play a key role in starting the process of change and in enabling the aforementioned practical steps through

To sum up what has been just said, Syrians need, in addition to ministries and central institutions, a cultural change through the infusion of new knowledge that can energize the Syrian society at the political, civil, and economic levels. Such change can only be achieved by education, training, and by building enabling structures.

Thank you for listening.

END OF THE PRESENTATION